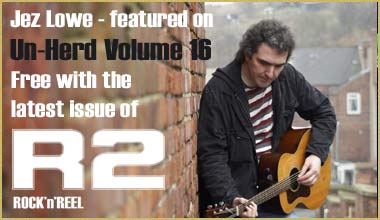 This second plank of seasoned 'heavy wood' music from Sheffield's Treebeard sees them once again hoisting their Campaign For Real Folk-Rock flag in that sun dappled English woodland glade forever populated by Mole, Ratty, Robin Hood, and Ian Anderson in a codpiece.Indeed a relaxed lope through Tull's 'Dun Ringill' is one of the clutch of covers - other notables are Zep's 'Going to California' and Nigel Mazlyn Jones 'A Singularly Fine Day' that will offer clues to the band's sound for those yet to make their acquaintance. For the cognoscenti, though, it's the original material that stands out. Flautist Ceri Ashton's 'Ale Jug/Rice' is the pick of a fine bunch of instrumentals, though 'Three McMahon's' runs it close, with Chris McMahon's electric twin neck mandola excesses just one of the many reminders of three-fifths of the band's proggy alter-egos as Haze.Of the songs, the supernatural ballad 'Highwayman's Hollow' is the one
you'll find yourself humming for days afterwards. A couple of covers don't quite come off: Albert Hammond's 'Free Electric Band' lacks the fresh exuberance of the original and 'Ace of Spades' sounds like Terry Dactyl And The Dinosaurs. These aside, though, this is craft-brewed English folk-rock of the finest order. Drink irresponsibly.

Amazingly this has yet to be picked up by a label, so for now the band have released it on their own until a time when it is made more widely available. Because of this the CD is only available through the web site (www.gabadon.co.uk) or at gigs. Treebeard used to be called Acoustic Haze, something to do with the fact that Chris and Paul McMahon and Phil Chisnell (i.e. Haze) are in the band, along with Chris Jellis and Gordon Walker. Heavy wood is not only the name of the album but is also how they describe their music, and as they say in the booklet "is a trademark of Twice Bitten and is used entirely without permission or justification". Basically they are an acoustic band, comprising many different types of stringed instruments plus percussion and violin. Four of the five guys take turns providing lead vocals while the album itself is a mix of songs and instrumentals, cover versions, rearranged traditional numbers and originals.

This is not a folk album, although it does contain folk elements, and is an album that I have enjoyed immensely. In fact, the day I got it I played it three times back to back and as now found it hard to pick a favourite. It kicks off with "Wilderness Of Eden" from one of Chris and Paul's other bands, World Turtle, and here it takes on a new life with more depth and presence than the original. While there are a couple of World Turtle and a few Haze songs on the CD, it is also the songs that they have chosen to cover that come across with some impact. I defy anyone who listens to "It's The End Of The World As We Know It (And I Feel Fine)" to say that this isn't superior in every way to the original REM song. I am not sure what a djembe is, but Paul Chisnell starts the song on it to great effect, and the mandolin and 12 string guitar combine with the harmony vocals and violin to take this song to great heights.

Other favourites? Well I feel that I ought to mention "Nothing Ever Happens", oh and "the Hangman & the Papist", and the different version of "(Come Up And See Me) Make Me Smile" or the album closer "The Devil Went Down To Georgia". There are some nods to folk with some traditional numbers such as "Lark In The Morning" (made popular by Fairport) and the four song medley that they have entitled "Percy In The Linen".

For more information visit either www.gabadon.co.uk or www.treebeard.co.uk. They have plenty of gigs coming up, more details on the web site. The CD is available for only £10, but if you buy two of the CDs available (Haze, World Turtle, Von Daniken etc) then it is £15 the pair or any three for £20, you can't get much better value than that.

Sometimes one is down, sometimes one is up. I'm usually down, liking the darker side of music. This new CD by the very interesting band Treebeard does 'the stuff' quite well. The self penned songs by Mr McMahon are splendidly self searching - ever killed a unicorn lately? The instrumental tracks, well known jigs and reels from the folkrock cannon, are carried off vith verve and passion.....but it's the covers of of, in my humble opinion, some fantastic songs that makes this CD a total cracker. U2 'Still Haven't found What I'm Looking For' - excelent harmonies. REMs - 'The End Of The World' - works a treat.It's nice to see a Rory Gallager song included ' Barley and Grape Vine' cool arrangement.

'Nothing ever happens, nothing at all' from that Scotish band - we love this song, and this performance is spot on. JRRT - Oh my - JRRT - 'Far over the Misty Mountain' great words (of course) works a treat. (Read The Hobbit)

If a band has to do 'The Hangman and the Papist' and 'The Wreck of the Edmund Fitzgerald' it must be a mighty brave band - good try folks, but not quite there - but thanks for trying:)

Other than the two songs mentioned above, and I'm only critical because I love the originals so much, this is a damn fine album.

Class Act - pity about the turn-out

Popular acoustic outfit Treebeard hit Matlock Bath's Fishpond to perform a superb set - to a sparse and disappointing turn out.
The festive spirit was very evident during the gig, with seasonal songs - played in costume - going down a treat.
formerly known as Acoustic Haze, the band started out as the unplugged sound of the rock trio who have just released a 20th anniversary reunion gig live CD.
Treebeard now line up as brothers Chris & Paul McMahon on guitars & other acoustic paraphernalia, percussionist Paul Chisnell on vocals, Chris Jellis guitar mandolin & vocals with Gordon Walker playing violin & vocals.
The set was a clever blend of originals & cover material, made all the more enjoyable by the friendly and fun loving attitude on stage.
Highlight of the night was the brilliant 'Wilderness Of Eden' track.
Treebeard deserve far more more recognition that they receive - but as always, class musicians seem at times to go unnoticed.
John Drinkall 04/01/01

Well here's another 'way from the blues' excursion for me - a 5 piece multi-instrumental folky band with a distinctly rocking flavour - a skilful mixture of traditional and modern that works incredibly well and seems to have a secret ingredient for helping the beer go down - hmmm! The perfect band for a lively Friday night audience.
If you don't know your reel from your jig don't worry, you're not alone, but you'll know all the rest...Whisky in the Jar, Stuck in the Middle, All Along the Watchtower, 'Cos I Luv You, Make Me Smile, that Waterboys one....You saw the whole of the Moon - and I think there was something of their own in their too, though I stand corrected - Restless Heart, The End of the World as we know It.... which both had a 60's sort of feel to me, 'protest', summer of love and all that, with some added millennium bite to the lyrics.
Well the beer was going down rather well at that point......! And I'm a learner with present day folk based bands. One thing I can say for sure though is that it was all a lot of fun, a real musical treat - so make a note to see them if you can. Highly recommended.
Hilary Drysdale